St. Xavier’s School, Doranda, was started in response to a request from the professional community of Heavy Engineering Corporation, Hindustan Steel Ltd. and the National Coal Development Corporation, in 1960.

The classes were held in the rooms of a rented house and under a tree. As soon as the rented house was sold to the Society, additional rooms were added and occupied in March 1961. In the mean time negotiations were started for a lease of five acres of land, on which is now the Senior Section is located.

From its beginning the School has been indebted to well wishing personalities. Dr. Zakir Hussein, the then Governor of Bihar, attended the first Parent’s Day and added his recommendation to our application for the lease. Dr. Binodnandan Jha, the then Chief Minister, piloted the application through the Cabinet Meeting. All procedures had gone smoothly, because Mr. Chakravarty, the Deputy Commission, had speeded up the matter from his department. In November 1961, the lease was granted and executed. It required an unusual measure of devotion from the staff, who had to teach under strenuous circumstances, without harming their efficiency.

In the first year a bus was hired from M/S Bharat Motors to bring the children to school. The bus having run the distance from Simdega to Ranchi brought them home in the afternoon. With rivers to cross, this was a liability in the rainy season. Nobody ever complained about any irregularity. When the bus was late, the boys enjoyed additional cricket practice. 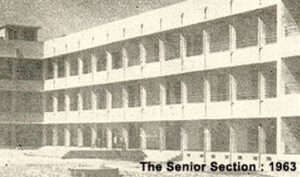 The first students shared in the pioneering spirit of their parents. They did not worry much about the inconveniences of the situation and they too did not allow these to affect their academic performance. At that time the school was affiliated to the Cambridge Board of Overseas Education, with Hindi as the second language on two levels. On a higher level, the equivalent of the Bihar syllabus was assumed by the School. The introduction of English as medium of instruction was purely utilitarian, as the students came from a varied background reflecting the multi-linguistic pattern of India: Hindi, Marathi, Gujrathi, Tamil, Malayalam, Telugu, Punjabi, Bengali, Urdu and English. This was reflected in the first Parents’ Day.

The motto of the school was coined in Sanskrit by Fr. C. Bulcke, when courage to excel by all was considered a contribution towards the building up of one country and one nation