Discipline is necessary for the smooth and efficient running of the school. Punctuality, Neatness, Courtesy, Generosity, Hard work, Consideration for others, Cooperation spirit is insisted upon in the school.

Discipline is also necessary to help the students to acquire self-discipline, without which a person cannot become upright and grow towards freedom. True freedom is the ability to freely choose what is really true and good. But, “it is a long way to freedom”.

A student’s mistakes are tolerated to some extent as part of the process of growing up, but repeated misbehavior and action against the spirit of the school is not tolerated even if this causes pain to the parents of the stubborn, uncooperative student.

A student should carry his diary and his identity card to school every day.

Pupils are answerable to the school authorities for their moral behavior even outside the school.

Habitual idleness, objectionable moral and indisciplined behavior is a sufficient reason for expulsion. Every student is urged to contribute to the high moral standard of the school by his/her manners and deportment.

English to be used in the school premises. Those not willing to abide by this regulation will be asked to leave the school. The number of times students are found talking in Hindi, marks will be deducted from English.

The school does not accept responsibility for the loss of books, money, clothes and other things.

All should arrive in time for classes. Those who are late or who have been absent must obtain an ‘Admit Ticket” from the Principal/Vice-Principal/Prefect before going to class. Habitual late comers may be sent back home.

Cycles must be locked in the cycle stand and may not be kept in the compound or in the verandah.

No body will be allowed to go home during class time except in case of emergency.

Students should get their Report Cards signed by the guardians within two days of the receipt of the Report Cards.

The school authorities reserve to themselves the right to dismiss anybody at anytime when for good reasons, concerning which the Principal/Vice-principal is the sole judge, if they consider the presence of the student prejudicial to the standard of the school. Parents, when they apply for their ward’s admission to St Xavier’s Doranda are understood to accept the Principal’s judgement in such matters, as final.

The school reserves the right to expel a student whose diligence or progress in studies is habitually and repeatedly unsatisfactory.

No shouting or whistling is allowed in the school building.

It is mandatory for students, teachers and office staff to attend the morning assembly.

If a student comes late, after the 3rd day of his/her late coming, he/she will not be allowed to attend the classes.

At the first bell, all must assemble for prayer in the usual place; at the second bell all stand in silence and recite the prayer with devotion. After the assembly all walk in silence to their respective class rooms accompanied by the class teacher. Boys should not play any kind of games in the corridors during recess.

All should take pride in keeping the whole school compound clean. Waste papers should be thrown in the baskets or bins.

Care must be taken of all school property and no student should scratch or spoil the desks or chairs or damage any school furniture, write or draw anything on the walls or in any way damage things belonging to others. Damage done should be reported at once to the class teacher or to the Principal / Vice-Principal. Any damage done will be made good by the one who did it if judged serious by the school authorities, the student may be dismissed.

Collection of money for any purpose is not permitted in the school without the written permission of the Principal /Vice-Principal.

Parents /Guardians are welcome to meet the faculty to discuss the progress of their wards every now and then except in Feb. and March.

Silence is to be maintained during the instructional hours.

While class is going on and something is not understood, the student wishing to put a question should raise his /her right hand and wait till the teacher gives the sign to speak.

The students have to sit in their assigned places in the class.

During games and breaks nobody is allowed inside the classrooms.

Students are strictly forbidden to bring any electronic gadget (Mobile, CD, Pen-drive, Camera etc). Once they are found with any, they will be seized and will never be given back. Parents must not give any justification for the faults. 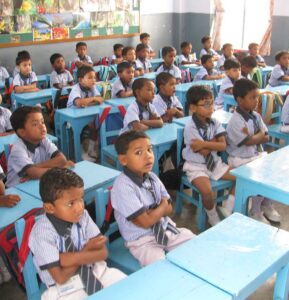 In the Class Room

Silence is to be kept at all times during the class period.

While class is going on and something is not understood the student wishing to put a question should raise his/her right hand and wait till the teacher gives the sign to speak.

The students have to sit in their assigned places in the class.

During games and Breaks nobody is allowed inside the classrooms.

The intended withdrawal of a pupil should be made known in writing to the Principal/Vice-Principal at least one calendar month in advance, or else one month’s full fee will be charged.

All buses are equipped with GPS Tracking System to govern speed and to ensure security. CCTV Cameras are installed for the same. Parents can locate the position of the buses through our school app cute brains SXD.

Rules and Hints about Study at home

The reading of library books is conducive to the formation of good style and it is a source of general knowledge.

Some Recommendations to Parents

The parents of St. Xavier’s School, Doranda have entrusted the school with bringing to maturity, the seed of manhood that has been so carefully sown in the home. They however, should co-operate with the school by their total involvement, which calls for a real understanding of the school’s philosophy.

The catholic boys of class IV and V are required to join the club of Crusveer or Crusaders and those of class VIII and IX Christian Living Community (C.L.C). The purpose of these clubs is to inculcate Christian values in the students for their character formation. St. Xavier’s Doranda being a Christian school it needs to bring Christian atmosphere of love and acceptance. With this end in view regular meetings are held in the school on Thursdays/Sundays/holidays and instructions are given to them and from time to time. CLC rallies, prayer sessions, retreats and excursions are arranged for them. the students {VI to XII} are expected to come to the school in their respective House dress.

Conclusion : While trying to observe school regulations, our students are asked to cultivate a spirit of willing collaboration rather than a spirit of mere submission. In this way they will learn to act out of conviction and not out of fear of punishment.