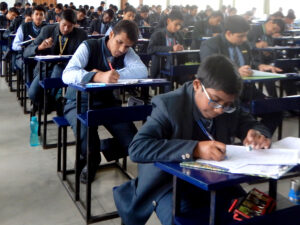 PIERRE DE COUBERTIN once demanded “Olympism at school. It must be encouraged” “OLYMPISM is a collective term for Olympic ideals/Values/Principles The International Pierre De Coubertin Committee is an Ancillary body of the Prestigious Olympic Association. This committee was established in the year 1996.

The main Objectives of this Committee are:

To Promote the Values laid down by its Founder Father Baron Pierre De Coubertin The Founder of the Modern Olympic games.

To inculcate the Value of respect for other Communities and cultures.

To spread the message of peace and brotherhood amongst all nations

To spread the spirit of the Olympic Games in Schools.

To educate the Youth on the Importance of Sports and games

In the year 2017, The Indian Pierre De Coubertin Association gave us the First Opportunity to take part in the Youth Forum which was held in Tallin, Estonia. A beautiful Baltic Country situated on the fringes of the Baltic Sea. We were called as observers 5 students and 1 teacher, but we did take part in all the Events. The Indian contingent not only did well but also won the hearts of many. We did make an impact and the result is, we are once again invited for the 12th International Youth Forum to be held in France from the 24th of August 2019 to the 31st of August 2019 and this time with a larger contingent based on the Japanese method of 7 +1.

The Events to be held during the youth forum are:

St Xavier’s School, Doranda has always pioneered to expose students to diverse cultures of the world to help develop one’s own personality. The school promotes sports and games as a major instrument in the development of a child’s personality.

The Students have been preparing very hard in all fields of sports and Knowledge tests as well as the Cultural part (where we display the richness of our Culture.

I feel Proud to announce that I have been Chosen to be a leader for one of the workshops to create a forum song.

I owe my heartfelt Gratitude to St. Xavier’s School management and especially to Father Ajit Kumar Xess who has not only been my greatest Motivator but also, for having faith and trust in my abilities.

What do Visitors Say !